Interviews are a lot like speed dating, only with a lot more riding on the outcome. Depending on the hiring company and the candidate, you’ll find that each party may have wildly different assessments of the experience.

If you are a job candidate, it can be easy to think that everything is about you, regardless of how your new potential employer may run the interview. But never forget that you are also interviewing them, and a bad candidate hiring experience can signal to you that a company may not be the right fit.

Sage Talent surveyed 5 of our partner candidates on their best and worst interview experiences. Each had a different hiring experiences, but all interviewed with several of the same companies over a given period of time.

What Makes a Great Candidate Experience?

A good interview should sound like a conversation. Tom (one of our surveyed candidates, and not his real name) attended an interview where they described portions of their interview as a conversation. Speaking about a Q&A encounter with a potential employer, Tom stated that their Q&A was attended by 6 team members, including 2 project managers, familiar with the projects he worked on. Here, they asked him about his experience in the field, what he enjoyed working on and with, and other questions that invited him to talk about himself in the context of the position.

He was also allowed to ask questions regarding the company, the culture, their challenges, etc. He remarked that there wasn’t an artificial time limit placed on the interview, so he felt comfortable in asking questions and responding to questions in a thoughtful manner.

Other candidates appreciated when they were able to get a good understanding of expectations and culture right from the start. Susan (not her real name) recounted an interview that involved several aptitudes and problem-solving tests. Rather that working through generic programming tasks, she was given a sample from the company’s codebase to solve an issue that had come up early 9and had already been solved). She reported that she felt that they wanted her to understand what would be expected of her at the same time they gave her the latitude to show off her problem-solving skills.

One aspect of Susan’s interview that she also positively noted was that she never felt like they were “gotcha” questions. Instead, she felt invited to offer suggestions and to walk through her though process with the team. “I think the key thing that made it great,” she said, “is that as I presented a solution the interviewer got involved and hinted towards optimizations or alternate approaches to solutions… this allowed us to discuss the pros and cons of each solution and determine which one is best given a constraint… it was really fun.”

Testing skills and problem solving comes with the territory. But supporting investigation and treating candidates like the professionals they are can relax them and help them perform at their best.

As noted above, Susan and Tom both expressed enjoyment of the fact that they were brought in as professionals, and that the hiring company seemed interested in learning more about them as such. Tom noted that he went through a team exercise involving a short demonstration on a problem domain raised in the interview. He said that he felt as if the team member (one of the interviewers) made them feel like they were already part of the team.

One thing that our candidates spoke out about was the use of stock questions that didn’t really speak to the qualifications of the candidate. For example, questions such as

process. Robert (not their real name) recounted an interview with 3 individuals, only 1 of which who was a developer working on the project they applied to. Robert felt uncomfortable as questions were asked without any seeming reason, and most of the interview team felt ill-prepared to discuss the position in any depth.

The APA has noted that unstructured interview practices can prove to be incredibly un-useful, and help introduce biases into the process as a whole. While they are discussing academic job interviews, the same can be said about the kinds of interviews (i.e., long and in-depth interviews) that many tech companies currently perform.

3. Disconnect with Department of Management

Following from the previous example, almost all candidates noted that they felt less confident or comfortable with a company when individuals not intimate with the project in a development or managerial role were not the primary figures in the interview process.

Perhaps the worst interview scenarios were described as aggressive or competitive. As noted above, most candidates enjoyed solving problems and giving presentations to show how they would work in a given environment. However, these tests were only productive insofar as they expressed some flexibility and excitement in terms of allowing candidates to express their skills. Our candidates found that tests meant to stump them, or tests with questions that only had a single answer that the interviewers expected as a sort of metric, where actually a turn-off.

Of course, this kind of hiring can also be a symptom of underlying hiring biases, which can significantly limit your ability to find quality clients.

While this may not seem like a key aspect of hiring, studies show that company branding is a critical aspect of hiring. Job seekers make a decision depending on the brand, and if you choose not to represent that brand during hiring, it can cause candidates to think twice about their relationship with your company.

It’s important to note here that every company has the right to use any sort of recruiting and interview techniques that they feel best reflect their needs.

That being said, we’ve noticed that companies that try to use a “trial by fire” approach to recruiting (gotcha questions, short and uninformative interviews, disconnected interviews) often turn off qualified candidates. In fact, these tactics actually signal to higher-tier candidates that the company that uses these tactics are not good places to work.

On the other side of that coin, a supportive and organized interview that provides space for expressing skills and ideas rooted in real-world company problems goes a long way in showing top-tier clients that the interview, and the position is worth their while.

Jobs at Google and Facebook are some of the most sought after in Silicon Valley—and candidates confirmed that there is a reason why.

Google gets over a million applicants each year. Hence, they have a highly optimized and structured interview process—which candidates appreciate. “As a whole-day experience, the process was extremely well-organized and the interviewers were obviously brilliant and the best in the business,” one candidate said. “I learned so much going there for the interview. However, it was also utterly terrifying.”

The Google on-site interview is a day-long process—which can be daunting, with several rounds of interviews and technical problem-solving. However, candidates note that the structure and professionalism helped them feel more at ease.

In addition, Google sends out a survey to candidates to get feedback on their experience throughout the hiring process. This makes candidates feel that their time is valued and allows Google to continually improve the candidate experience.

Facebook has similarly optimized their hiring process. “The interviewers are well-prepared. For a company at that scale, they had a highly standardized procedure,” another candidate said. “That made me feel good.”

On the one hand, the lessons here seem simple: be organized, be on point, and get the right people (knowledgeable, excited, and supportive) to do your interviewing.

On the other hand, that kind of skill in recruiting can be hard to cultivate internally. HR departments can suffer from a disconnect with the project in a real, “boots on the ground” way. Experts working on that project, however, might not have the skills necessary to really engage in successful recruiting--or they might just be too busy doing their own jobs.

In more difficult cases, particularly when trying to recruit high-skill, high-expertise candidates (or even C-level candidates), a reputable recruiting firm with industry knowledge can bridge that gap for you.

Nick Chandler, “Employer Attractiveness: A Study Into the Link Between Demographics of Jobseekers and Reasons for Applying for a Position,” Journal of Human Resource Management XXII (January 2019), https://www.jhrm.eu/2019/06/30-employer-attractiveness-a-study-into-the-link-between-demographics-of-jobseekers-and-reasons-for-applying-for-a-position 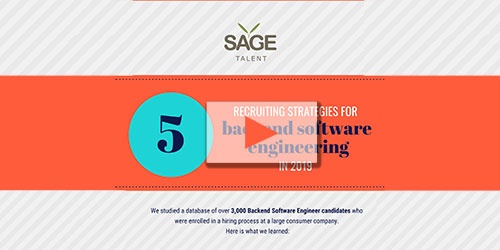 Paul is the CEO and founder of Sage. He started his career in technology with stints in software development, immunology, research and sales. Prior .... Read More ›

5 Steps to Get Candidates to say YES to Your Job Offer
5 Recruiting Strategies for Backend Software Engineering
Intelligence, not Intuition: How Recruiting Analytics Impacts HR & Sourcing
Understanding the Candidate Experience
Watch Your Wording - Hiring Based On Gender